This exhibition explores the album, an innovative genre of visual art popularized in the 1970s by conceptual artists in Moscow. Comprising loose pages of delicately colored images often complemented by handwritten texts, an album is simultaneously a drawing and a novel, an installation and a performance. As leading practitioners of the genre, Ilya Kabakov and Viktor Pivovarov produced dozens of albums addressing the triumphs and tribulations of their everyday lives in the Soviet Union. Using literary devices such as allegory, metaphor, and synecdoche, their albums tell stories that are at once specific and universal.

Under communism, Kabakov and Pivovarov shared their albums in the semiprivate spaces of their homes and studios with their friends—artists, writers, and intellectuals seeking creativity outside state-sanctioned socialist realism. Marked by social, economic, and political stagnation, the 1970s in Moscow was a particularly difficult decade. Whereas official artists had established networks of support, including art academies, artist unions, state museums, traveling exhibitions, and even so-called art critics, those choosing to produce art in unofficial capacities had to be creative with their resources. In its form and content, the album is a hallmark of unofficial Soviet art.

Drawing primarily from the Zimmerli’s Norton and Nancy Dodge Collection of Nonconformist Art from the Soviet Union, this exhibition juxtaposes the albums of Kabakov and Pivovarov with their paintings and children’s book illustrations of the same period. In doing so, it reveals the album as the very foundation of Kabakov’s and Pivovarov’s respective practices. Today, the album continues to serve as an inspirational model for audience engagement that bridges the gap between the individual and collective experience.

Ilya Kabakov and Viktor Pivovarov: Stories About Ourselves is the second edition of Dialogues, the Zimmerli’s series of dual career exhibitions from the Dodge Collection. This ongoing series is designed to increase historical awareness of the aims and impact of unofficial art in the former Soviet Union by highlighting a particular aspect of it.

The exhibition is accompanied by a catalogue by Ksenia Nouril with contributions from Tomáš Glanc, copublished by the Zimmerli Art Museum and Rutgers University Press. (The catalogue is available for purchase here, in a variety of formats.)

The exhibition is made possible by the Avenir Foundation Endowment Fund. 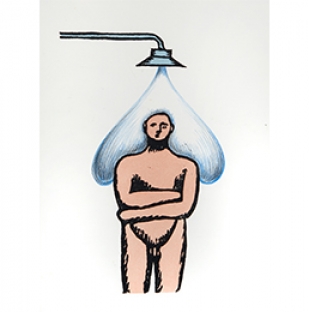