They often say that you can tell a lot about a person from their name. In this case, TALENT embodies the definition with full force. TALENT’s comedic style is firmly grounded within his innate ability to combine impromptu humor and an instinctive timely delivery. Often referred to as comedy’s “King of New York”; with his natural ability to bring laughter into household and venues. He has headlined his own comedy shows and tours as well as making special appearances on such reputable programming as: BET’s Comic View, HBO’s SNAPs & Def Comedy Jam and earned the position as host of New York’s 98.7 KISS FM’s Morning Show. Talent’s capacity for achievement and success is a constantly evolving journey.

TALENT has been cast alongside such celebrated actors as Danny Devito, Marisa Tomei, Rosie Perez, John Leguizamo, Vanessa Williams and more. His growing theatrical resume includes appearances in movies such as, “Sunset Park:, “Full Court Press”, “A Brother’s Kiss”, “Fulgazi”, “My Brother” and “With or Without You”. Growing into an icon and one of the most successful artists in the entertainment world, TALENT’s comedic gift stretches far beyond the stand-up circuit. He has loaned his voice to national commercials, music album collaborations with such celebrities as, producer-rap superstar, Missy Elliot. The multi-dimensional TALENT has extended his range with an interlude as a contributing writer for one of the largest urban/hip hop magazines: The Source. TALENT’s column, “Joker’s Wild” offered frank commentaries with an impressive list of “acclaimed” comedians.

He currently continues to headline several open-air venues, in the face of Covid-19. Prior to being forced to alter the types of venues in which he performs, he headlined at every premier comedy club throughout the United States and abroad, such as Caroline’s on Broadway, Showtime at the Apollo and many others. The comedian who has put a trademark on finding humor in the dynamics of life by entertainingly reminding us not to take all this too serious, because…”IT’S JUST COMEDY!” is one of the most sought after comedians in the business.

In an effort to remain fresh and one of comedy’s most innovative, TALENT has most recently assumed the following roles: Creator and Producer of social medial platform podcasts and radio shows as follows: Motivational Mondayz, Da Divided States of America, Soundtracks & Sunday Stories, The Next Episodes, It’s Just Comedy the Show, The Bump & Grind Café and Twitter After Dark. He is a co-host on the Wake-up Club @103.9 WDKX/Rochester New York, as well as an on-air contributor for Buffalo’s WUFO FM.

The seasoned comedian who currently resides in New York City, has dedicated almost 30 years to his profession. Although this era may seem like a lifetime to some, the past almost 30 years have merely laid the foundation of a greater, wiser and stronger culmination of successes. Yet, as TALENT says, “To this day, he is just getting started.” TALENT’s tireless efforts continue through acting, endorsements, development deals, television scripts, and entertainment venues. If that were not enough to keep him busy, TALENT acts as Creator and Producer of the top comedy of the past decade: “The NY Kings Comedy Tour”.

As they say laughter is the best medicine and humor lightens your burdens, inspires hopes, connects you to others, and keeps you grounded while keeping in mind…IT’S JUST COMEDY!! 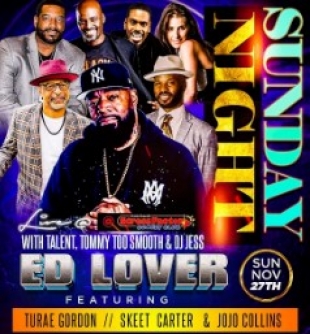