Subject to change, call us for updated hours on our voicemail

Spina Records opened its doors in 2014 and was originally located in a cramped but cozy basement shop on the corner of Easton Ave & Somerset St. We quickly outgrew our little space and moved locations in early 2018 to 118 Easton Ave.

Moving to the Hub City in 2005, Andrew Spina quickly embraced the active and chaotic underground music scene. After graduating from Rutgers, he found himself working at an antique store on George Street, which just so happened to have a small selection of records for sale. Spina quickly saw how many people were coming in to look at the antiques but leaving with vinyl records. Being a record collector himself since the age of 12, Spina could see the renewed interest in vinyl building and soon decided to try opening up a record store.

New Brunswick was the perfect location for a vinyl record shop with its strong independent music scene and history of being the breeding ground of many influential bands, musicians and artists. 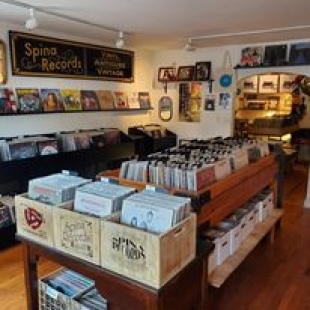