About 30 members of the public participated in making a street chalk mural to commemorate Juneteenth in the heart of New Brunswick.

This past Friday, about 30 members of the public participated in making a street chalk mural to commemorate Juneteenth in the heart of New Brunswick's city center.

The chalk mural was created at the intersection of George Street and Livingston Avenue, next to Monument Square Park and the Heldrich Hotel.

The mural was made under the direction of the African-Latino artist Louis-Miguel "Louie Blaka" Caraballo, and any member of the public was invited to participate, starting at 9 a.m. Friday. About 25-30 people participated.

The street mural is called "Deliverance."

"It features two broken chains that signify the importance of freedom and serve as a reminder of how far we have come as a society," read a statement about the work. "The silhouette of the two children reminds us that our future lies in their hands. Our history and traditions will be kept alive by the youth. The butterfly is a symbol of hope and new beginnings."

The mural will be there until it gets washed away by the rain.

This was part of the city of New Brunswick's weekend of Juneteenth events, to commemorate the freeing of slaves in America. This past weekend included a parade, a raising of the Juneteenth flag, a performance from the Universal African Dance and Drum Ensemble, free concerts, and a block party in New Brunswick's city center. 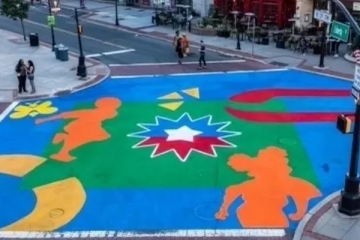