The children who created the concept behind the city’s newest street mural wanted to convey the idea that a united community is a safe community.

So, a Hamsa – a palm-shaped talisman that represents protection to Jews – took shape Tuesday at the corner of Livingston Avenue and Delavan Street near Temple Anshe Emeth.

Inside the Hamsa safely rests a hummingbird like those indigenous to Oaxaca, an area of Mexico that is the native homeland of many New Brunswick residents.

The bottom portion of the Hamsa is filled with a dahlia, which is a flower that is also native to Mexico.

Before he spread on a drop of paint, DOAZ said he workshopped with children from nearby Temple Anshe Emeth as well as children from the Esperanza neighborhood. He asked them: What does community mean to you?

“Some of the ideas that came from the workshop included safety, protection, comfort,” DOAZ said. “Some said the community is where you can be yourself, where you’re free to be yourself.”

The asphalt art not only bridged some of the city’s cultures but also brought together New Brunswick Tomorrow’s Esperanza Neighborhood Project with coLAB Arts. In fact, coLAB Arts under creative director Dan Swern, served a residency with Anshe Emeth’s religious youth program.

Swern said that in addition to exchanging ideas for the street mural, the children from the synagogue and the Esperanza neighborhood shared traditional foods. The kids from Anshe Emeth made babka, a sweet cake that originated in Eastern Europe and is eaten by Jews all over the world with cinnamon, chocolate, cheese, or other fillings and flavorings. The kids washed it down with traditional Mexican hot chocolate.

“We are incredibly lucky to continue to have a broad and effective relationship with the Esperanza Neighborhood Project, New Brunswick Tomorrow,” Swern said. “They are an incredibly prescient and participatory organization in understanding the importance of intercultural conversation through artwork and through intercultural events.”

New Brunswick Tomorrow’s Esperanza Neighborhood Project and coLAB Arts were able to collaborate on an intercultural mural with DOAZ a few years ago at Somerset and Maple streets that focused on the waves of immigrants who have found their way to the city, up to the current day wave of Latino immigrants.

DOAZ, who recently created a sister mural on the other side of Livingston Avenue that depicted a symbol of peace (a dove) and a symbol of wisdom (a pomegranate) inside a Hamsa, got some help from a dozen or so community members on Tuesday.

One of them was Charles Bergman, the director of the Esperanza Neighborhood Project, who was helping out on his birthday.

“Today was a chance for some community members, young folks, to come out and participate for a few hours and paint the mural,” Bergman said. “The community came to pitch in at this point when we were laying down the colors and the RH and the others will finish out the detail work over the next few days.”

Story and photo by: Chuck O'Donnell 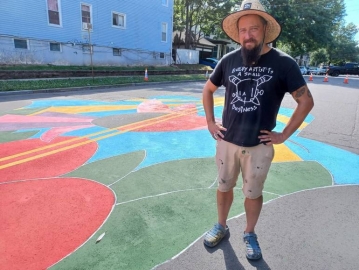