Strolling for Sights: Take an Art Walk in and Around College Avenue

Exploring New Brunswick on foot? Rutgers University’s artistic heritage is a rich one. Works by renowned artists can be found in and near the Voorhees Mall.

Heading back to Rutgers University-New Brunswick in the fall provides an opportunity to revisit some favorite landmarks and learn about the famed artists whose outdoor works are on display.

Here is a walking tour of some of the sights in and around the College Avenue campus. We’ll start at the shaded, grassy Voorhees Mall near the Department of Linguistics building on Seminary Place:

Standing between the Rutgers Graduate School of Education and the linguistics building is a familiar sight to students, faculty, and other members of the Rutgers community: the oxidized bronze statue of William the Silent, also known as “Willie the Silent.”

Installed in 1928, the statue honors William I, Prince of Orange, the leader of a Dutch revolt that led to independence in the Netherlands. It was donated by Fenton B. Turck to commemorate the university's Dutch heritage.

As Rutgers Today noted in 2019: “It’s a storied landmark that has inspired pranks, is a source of folklore, and was even named in The Huffington Post as one of the most loved statues on an American campus.” (So, what’s the folklore exactly? Best Google it.)

If you wander down Seminary Place past the Department of Linguistics toward College Avenue, you’ll come across a plaza dedicated to one of the most acclaimed Rutgers graduates, Paul Robeson.

As Rutgers notes: “The son of a runaway slave, Robeson attended Rutgers College in New Brunswick on an academic scholarship, becoming the university’s third Black student and its first Black football player.”

The university dedicated the open-air plaza, which includes eight granite panels detailing the story of Robeson’s life, in 2019 to honor the Renaissance man’s legacy as a scholar, athlete, actor, and global activist for civil rights and social justice.

3. A World Turned Inside Out

Now venture back into Vorhees Mall behind Scott Hall and you’ll come across A World Turned Inside Out, a World War II memorial that features Inside Out, an abstract geometric sculpture by Buky Schwartz, an Israeli sculptor, and video artist.

The memorial, dedicated by the Class of 1942 in May 2008, features 11 stainless steel panels that display the 247 names of Rutgers alumni and students who gave their lives during WWII. Schwartz’s sculpture was moved from the front of the Zimmerli Art Museum to be the memorial’s centerpiece.

Speaking of the Zimmerli, head there next to check out Walking Man by Rutgers alumnus George Segal, an internationally renowned sculptor of the Pop Art movement.

The bronze sculpture, donated to the Zimmerli by the George and Helen Segal Foundation in 2011, can be found at the corner of Hamilton Street and George Street and appears to be headed toward the entrance of the museum.

Now you have options: Continue your outdoor stroll or visit the art museum, where you can see exhibitions devoted to the art of the Americas, European art, and the Norton and Nancy Dodge collection of Soviet nonconformist art.

The Zimmerli is open Wednesday through Sunday, and open late on Thursdays. (Note: The museum is closed to the public in August while staffers install new exhibitions, which open Sept. 1.) You also can learn about the university’s Fluxus art movement to increase your trivia knowledge about Rutgers.

From the Zimmerli, cross Hamilton Street and make your way to Kirkpatrick Chapel at 81 Somerset St. on the Old Queens campus.

The chapel, constructed in 1873, is frequently used for weddings, lectures, musical performances, and other events. According to the New Jersey Historic Trust, the chapel is “an excellent example of High Victorian Gothic ecclesiastical architecture. The chapel's stained-glass windows contain some of the first opalescent and multicolored sheet glass manufactured in America.” The Kirkpatrick website notes that “four of the chapel windows are from the studios of Louis Comfort Tiffany and date back to the late 19th century.”

You may wish to end your tour here or continue into the heart of downtown New Brunswick.

(If you do proceed, here’s some extra credit: Head south on George Street toward Albany Street and look to the east to spot Johnson & Johnson’s world headquarters. The building was designed by Henry N. Cobb of Pei Cobb Freed & Partners, an architectural firm founded in part by internationally acclaimed architect I. M. Pei, who once drafted a blueprint to redesign New Brunswick’s central business district.)

Continue south on George Street to Livingston Avenue. In front of the Civic Square building at 33 Livingston Ave., home of the Mason Gross School of the Arts. Situated next to State Theatre New Jersey and across from the Heldrich Hotel stands The Tuning Fork Oracle by Alice Aycock.

A Douglass College alumna, Aycock is known for her large-scale sculptures. Her work has been exhibited in the Guggenheim, the Museum of Modern Art, the Metropolitan Museum of Art, the Brooklyn Museum, and the Whitney Museum of American Art, among others.

(Extra credit for avid walkers up for a 16-minute trek: Check out The Miraculating Machine in the Garden, another large sculpture by Aycock, on the northeast side of Mabel Smith Douglass Library at 8 Chapel Drive.) 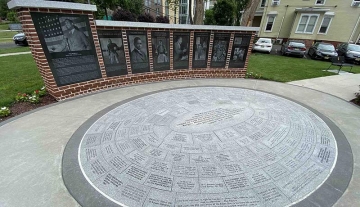