Six life-sized sculptures created by a renowned artist and New Brunswick native will be interspersed throughout the city this month.

The works of Seward Johnson will be installed along George Street and Livingston Avenue, creating a self-guided walking tour in City Center New Brunswick.

The works ranging from Albert Einstein riding a bicycle to men playing chess to a couple locked in a kiss are captured in Johnson’s signature hyper-realistic style.

There will be sculptures of a woman walking a dog, a woman carrying groceries, and a woman on hands and knees doing some gardening.

The works will be on display until Oct. 15.

Seward Johnson Atelier, Inc., New Brunswick Public Sculpture, and New Brunswick City Center will host an unveiling event Monday, Aug. 15 at 11 a.m. at 375 George Street. Mayor Jim Cahill and others will participate in the event, which is open to the public. Refreshments will be served after the ceremony.

In honor of the temporary installment of the Johnson art pieces, City Center New Brunswick will be hosting a post-a-selfie contest with one of the sculptures. To enter, simply post a selfie on your Facebook and/or Instagram account with the hashtag #NBStatue. You will be in the running to win a gift card valued between $25-$100 to New Brunswick shops and restaurants. Entries will be accepted between Aug. 15-Sept. 30.

John Seward Johnson II was born in New Brunswick in 1930, the grandson of Johnson & Johnson co-founder Robert Wood Johnson I.

More than 450 of Johnson’s life-size cast bronze figures have been featured in private collections and museums in the United States, Canada, Europe, and Asia, as well as prominent places in the public realm such as Times Square and Rockefeller Center in New York City, Pacific Place of Hong Kong, Les Halles in Paris, and Via Condotti in Rome, according to the Seward Johnson Atelier website.

He was the founder of Grounds for Sculpture, a 42-acre sculpture park, and museum in Hamilton Township. It is home to many of his works that range from sculptures of children at play to an old man lying on the grass.

They all command double-takes, but none more so than “Double Check.” The sculpture of a businessman rifling through his briefcase was installed at Liberty Park, not far from the destruction of the World Trade Center on 9/11. Firefighters, mistaking the sculpture for a real man, rushed to save him in the wake of the day’s chaos. 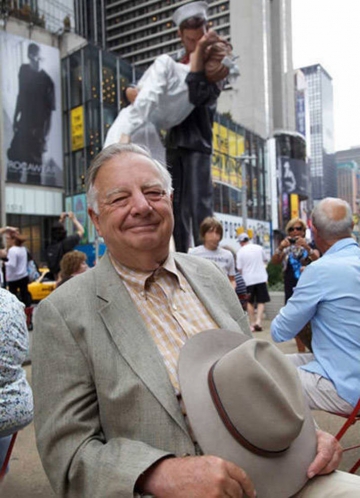