The first Latino from New Brunswick to become Exalted Ruler of Elks Lodge 324 – which traces its roots in the city back 126 years – is bringing a fresh perspective and dynamic energy to his role.

Jerry Mercado’s goals include boosting membership after it was affected by the COVID-19 pandemic and pushing the lodge to become more proactive in renting out its hall through a newly created event manager position.

His biggest idea, though, is establishing a New Brunswick Elks Day on March 24 – 3/24, of course.

The celebration will in many ways mark the beginning of the end of his year as the lodge leader, and he hopes to close it out by creating a tradition that will carry on for generations of Elks who will gather at the lodge at 40 Livingston Ave.

Mercado hopes the New Brunswick City Council, Middlesex County Commissioners, and maybe even state leaders can fashion proclamations proclaiming March 24 at the New Brunswick Elks Day. The official document could detail some of the Elks' community service initiatives, which range from throwing barbecues for residents of the Menlo Park Veterans Memorial Home in Edison to running baseball, soccer, and basketball programs for New Brunswick youth.

If there’s a through line in Mercado’s plans for the next several months, it’s for the elks to become an even more visible part of the city. He wants to open the lodge's doors to the public for programs such as Latin Night and Jazz Night.

Mercado came to New Brunswick by way of Connecticut, The Bronx, and Newark. He was a Rutgers grad (Class of 1993), who married a New Brunswick native (Ana) and settled down in the city in 1996.

While working as a practice performance manager for Optum, which is part of the United Health Group, and raising three children with Ana, he has always made time to serve the city.

He was a commissioner of the city’s Housing Authority from 1997-2002. He served on the Zoning Board from 2002-08. He was also the driving force behind the creation of the city’s Little League program in 2012 and spent five years helping run the organization that gave dozens of city youth a chance to play baseball each summer.

“I was able to get 50 tickets to a Mets game one year from their TV station, SNY,” Mercado said. “I was able to work with the New Brunswick Fire Department and they helped us by sponsoring the bus for the kids. And, we only charged $5, and that was basically to cover the tip and some of the food.”

Eleven days after becoming a member of the Elks Lodge 324 in 2014, Mercado was already the head of a committee. So, it should not be a surprise that he stepped up to become its Exalted Ruler during a ceremony steeped in tradition, down to the bestowing of the lodge jewels.

Mercado, whose father was from Puerto Rico and mother came here from Ecuador, said he is seeing subtle changes around the lodge. Or as he put it, “I have seen since I’ve been Exalted Ruler more people coming in that normally have not been coming in.”

That’s a source of pride for Mercado, considering the lodge has been active in the city since 1895 and has counted mayors, council members, and many other city leaders among its ranks over the decades.

“To lead an organization that's been here for such a long time, it's such a big honor for me,” he said. 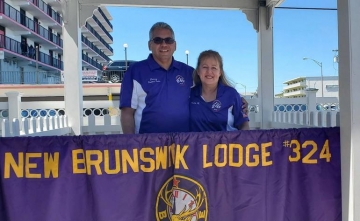 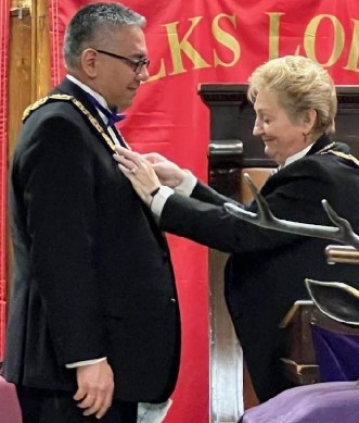