The owners of New Brunswick’s newest restaurant hope to stand out in a crowded smashed burger landscape by serving up singles, doubles, and triples with fun, delicious twists.

Co-owners Ahmed Ewida and Hoaataz Elkot, who opened the doors at Buns N Shakes at 112 Church St. about a month ago, have concocted such luscious creations as the Smashcheetos (a burger with crunchy Cheetos, lettuce, and tomato) and the Smashmac (a burger with macaroni and cheese, beef bacon bites and barbecue sauce.

They can be paired with an order of Hot Honey Chicken Fries (crispy fries topped with homemade Cheez Whiz sauce, beef bacon bites, jalapeños, crunch Cheetos, homemade coleslaw, and pickles) or Nashville Hot Chicken Mac and Cheese (with your choice of mild or spicy Diablo sauce).

Wash it all down with one of their signature creamy creations, such as the Twinkies shake or Reese’s shake.

The beef is fresh and well-seasoned, the homemade blend of several types of cheeses is lush and velvety and this burger joint in the space that was formerly a pizzeria at 112 Church St. is bright and inviting.

“We’re a cozy restaurant,” Ewida said. “You can come in. We’re very friendly here. I think we have great service, great service staff. You’re not going to be treated like a stranger in my restaurant. You’re going to come in and feel like part of the place. It’s going to be your hidden gem.”

It’s been a journey of about 5,000 miles and several years to become New Brunswick restaurateurs for Ewida and Elkot, who are both from Egypt.

Elkot came here about six years ago, attended Rutgers, and served in the Army National Guard. He did his basic training at Fort Leonard Hood in Missouri.

He landed a corporate job doing supply chain management, but it wasn’t right for him.

“I don’t like sitting in the office, on the laptop,” he said. “I was into more having my own business and I was always thinking about having my own food business.”

So he joined forces with Ewida, who owned Krispy Krust Pizza on Route 130 in North Brunswick for eight years but was eager to branch out.

“I want to try new ideas and I want to expand,” he said.

And so, the menu for Buns N Shakes was in the planning stage months before the restaurant opened.

Ewida and Elkot said not being on George Street creates a challenge to create food traffic. They are using social media to spread the word, and are planning a menu mailing. More than anything, they are hoping a diverse menu will create loyal customers.

The hope is the selection of smash burgers becomes a hit with Rutgers students, while the signature sandwiches such as the Chicken Steak Bun or the Chicken Bacon Ranch Bun become a favorite among the corporate crowd from nearby Johnson & Johnson and Robert Wood Johnson University Hospital. 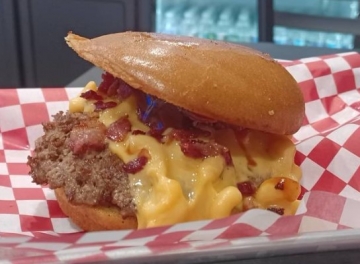