Erin Twohig and Dylan Mitzak were stationed in the back of the room, diligently squeezing moisturizer from family-sized containers into bottles with an opening smaller than a dime.

Aside from a tiny amount of Suave (advanced therapy with rich hydrators!) that had pooled on the table, they had this tricky process down to a science – as evidenced by the 30 or so bottles assembled in a cardboard box sitting on a nearby chair.

“We did a pretty clean job all things considered,” Mitzak said, “but it’s for a good cause and it’s great to see everyone else here helping out.”

Twohig, Mitzak, and other members of Ethnos were demonstrating a steady hand and a helping heart on Sunday afternoon in this comedy club-turned-sanctuary on Church Street to create single-sized bottles of shampoo, conditioner, and soap.

The idea to purchase products, divvy them up into smaller samples and donate them to the New Brunswick nonprofit organization Archangel Raphael's Mission (ARM) was the brainchild of Ethnos congregant Sherry Huang.

Huang, the Vice-Chancellor of Graduate Medical Education for Rutgers Biomedical Health Sciences, read a TAPinto New Brunswick article about Beauty Plus on George Street going out of the business.

After reading that the owners were trying to liquidate their stock at discounted prices, she purchased several bags full of whatever she thought would help ARM service the homeless in New Brunswick.

Huang had no idea at that moment that several other congregants at the nondenominational church under Pastor Yucan Chiu that hosts its Sunday services under The Stress Factory’s expansive tent would also head to the store – not to mention other nearby stores - and buy personal hygiene products.

And she certainly didn’t envision about 30 people taking part in a post-service event to repackage the products, pack them in boxes, and stuff them in the trunk of ARM co-director John El-Maraghy’s Subaru.

ARM will use them in the spring and summer for its mobile hygiene unit that offers a warm, cleansing shower that literally washes the streets off the backs of New Brunswick’s most vulnerable population.

Huang said the act of shopping for the products and repackaging them becomes a powerful action that gives a tangibility to the ongoing efforts to help others.

“It’s very easy to say, ‘OK, here's $5,000 to build a new toilet that's portable,’” Huang said “I think when people who've never suffered inconveniences realize what it takes to have that access to a toilet, access to a shower, access to washing your clothes, and the amount of coordination that's required, they don't take it for granted.”

Giving has been part of her family long before they relocated to New Brunswick from San Diego after she was hired at Rutgers RWJBarnabas Health last year.

Her daughter, Sara, who underwent a couple of knee surgeries, collected donations of crutches, wheelchairs, and other orthopedic equipment and shipped them to a hospital in Uganda – an area of the world when people often use tree branches to help them walk.

Sherry, Sara, and the rest of the family, in cooperation with a missionary group, eventually traveled to the Uganda hospital, which named a wing in Sara’s honor.

Sherry’s son, Christopher, began to offer inner-city youth in California free music lessons. That led to him and the family collecting donations of all sorts of instruments that were then handed out to kids who could not afford their own. Then, the music room in the church the family belonged to in San Diego was converted into a Sunday afternoon music hall where lessons were given to about 30 children.

So for Kye Cheung, Sherry’s husband, it was no surprise to see her return from Beauty Plus with bags in hand.

Surveying the tables where audience members sip draft beers and watch comedians crack wise on weekend nights turned into a sort of production line of care and compassion was amusing to Chung.

It also touched his heart.

“I remember when Sherry brought a bag full of shampoo,” Chung said. “And then she went back and bought two more bags. And our daughter was visiting from Berkeley and she bought some. It began to take a life of its own.”

Then he turned toward the Ethnos congregants hard at work.

“This is what community looks like,” he said. “A community of people, tons of folks helping out. This something that we’re just proud of.” 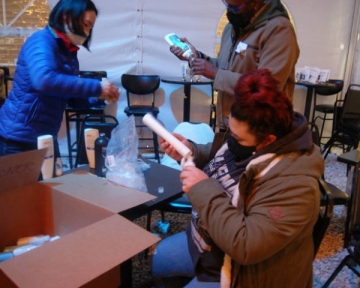