Mark Pascal and Francis Schott slip to a quiet table in the corner after running a gauntlet of business meetings, including one exploring a partnership with Middlesex College.

They just need a few moments to catch their breath and have something to drink, but they’ve already been spotted by some longtime diners/old friends who are impatiently awaiting their visit to their table.

That makes their plans to celebrate their 30th anniversary as restaurateurs in New Brunswick a little surprising and all the more special.

On Friday, May 20, Pascal and Schott will be hosting Walk Around Wine Tasting and Dinner with Skurnik Wines and Harmon Skurnik – an influential wine importer and distributor who has become a longtime collaborator with the New Brunswick restaurateurs.

On Sunday, May 22, they will be hosting a cocktail party celebrating the 35th anniversary of the so-called Cocktail Renaissance and their role in it. Dale DeGroff, the father of modern cocktail culture, will be on hand as the most important cocktails invented since 1987 will be poured and blues guitarist King Solomon Hicks will provide live music.

In fact, the 30th-anniversary celebration will stretch through the summer. Starting June 25, there will be weekly events before Saturday’s dinner service – think tiki party with live calypso music, a shore dinner, and more.

For Pascal and Schott, their connection to New Brunswick goes back further than 30 years, before they opened 1992 Stage Left - a sophisticated steakhouse with creative contemporary cuisine. And, it certainly predates the 2005 opening of Catherine Lombardi, a home-style Italian restaurant that is not only named after Pascal’s grandmother but features her old-world recipes.

These guys became the best buds living in Rutgers River Dorms in the mid-1980s, long before they dreamed of becoming enmeshed in the city and becoming the driving force behind the New Year’s Eve fireworks show that has turned the city into a holiday destination.

So when they allow themselves to look back, they do so together, sometimes completing each other sentences.

Francis begins to talk about how faithful customers were there during the Great Recession of 2008 and the Great Resignation of 2021 and other hard times. He said during the darkest days of the COVID-19 pandemic, when restaurants were relegated to serving takeout meals, many of them purchased gift certificates that they had no intention of redeeming.

“They basically made a donation to keep us going during the tough times,” Francis said.

Mark begins to tell the story about the one customer who didn’t ask for his deposit back after booking a party at the restaurant.

“He said, ‘Well, we’re not going to have a party this year, but we’ll have it the following year. How about if I send you a check for $4,000 in order to add to my deposit in order to help you get through the bump of this?’” Mark said.

The upcoming events are also a recognition that Pascal and Schott are not chefs in an era where so many fine restaurants are being opened by them. That means that some of their chefs have been with them for decades. So have other employees.

“This is a chance to celebrate with all the people who have taken the trip with us,” Pascal said this respite won’t last long, but the owners/operators of sister restaurants Stage Left and Catherine Lombardi wouldn’t have it any other way. Their recipe for success has been equal parts looking forward and never standing still. 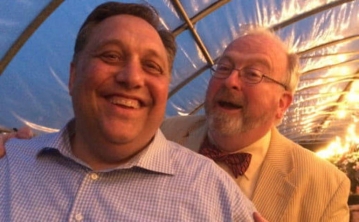