Rankins Enlisting the Help of NFL Stars Casillas, Ffrench to Kick Things Off

Some of Laquan Rankins’ favorite childhood memories took place on the soccer field, where he was known as Thunder for his booming kicks and they called his cousin Lightning because he was shifty and speedy.

Thunder and Lightning were a force of nature on city fields for years. And if it wasn’t soccer, Rankins was off playing some other sport.

“Growing up in New Brunswick, I played soccer, I played baseball, I played Pop Warner football, I played basketball through the Hot Shots program,” Rankins said. “So there were always programs offered and there was always something to do.”

His experiences as a kid growing up in the city, his passion for mentoring young athletes, and his deep connections with the community made him the perfect choice to fill the newly created full-time position of Youth Opportunity Coordinator.

For his first initiative, Rankins is in the process of forming a flag football league to give the city’s kids a sport to play after the baseball season ends and before the high school sports seasons and the Pop Warner seasons begin.

To kick off the flag football league, Rankins has called upon a few friends and New Brunswick High School football legends – Jonathan Casillas and Maurice Ffrench – for a little help.

Casillas, a two-time Super Bowl champ and former linebacker for the New York Giants, will serve as captain of the Navy Blue Team. Ffrench, a wide receiver for the Los Angeles Chargers, will be the captain of the White Team.

The Battle of the Decades will also feature many other former Zebra stars on Friday, June 17 at Memorial Stadium at 6:30 p.m.

The game is designed to get the city’s youth excited about Rankins’ new Flag Football League, which will start June 25 and run through August 1.

Rankins said he hasn’t gotten a lot of interest so far from high school and middle school players.

“But the younger kids, I have about 35 kids signed up right now,” he said.

Rankins is a familiar, often-smiling face around town. Among other things, he has served for several years as a volunteer coach under New Brunswick High School head football coach Nate Harris.

Laquan and Jasmin have been married five years and have two kids, 2 and 4. They are also helping raise two of his wife’s cousins, who are 18 and 20.

“I’m from the city,” he said. “I’m all about the community. I’ve been mentoring kids since I was 18. So, anything that I could do to help keep kids out of the system and stay in the community and active and be healthy, I’m all for it.” 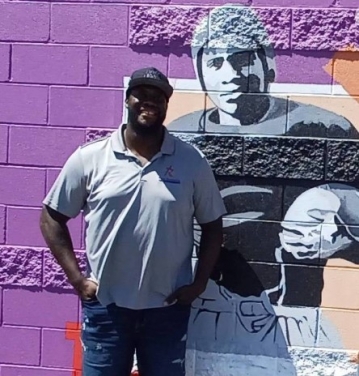